History and biodiversity of the Muggio Valley

Ancient rural buildings, evidence of the past and unique biodiversity are hidden in the Muggio Valley.

The Muggio Valley, right at the southernmost tip of Switzerland, is known for its agricultural history and rare flora and fauna. The Ethnographic Museum of the Muggio Valley works in conjunction with other bodies to preserve this unique cultural landscape.

Mark Bertogliati, curator of the Ethnographic Museum of the Muggio Valley 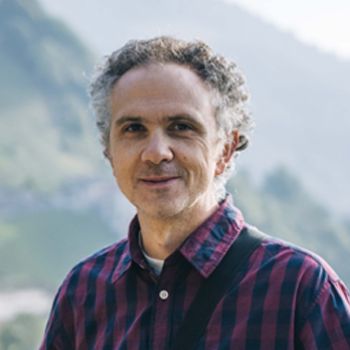 Every stone out there has a story to tell. And we have a wealth of farming history here.

Picturesque little villages dot the hills on the sides of the River Breggia. Despite the steep slopes interspersed with limestone layers, the landscape is anything but rugged with its leafy forests, brightly lit glades, flower-filled meadows, mountain pastures and charming hamlets. The Muggio Valley’s biodiversity is extraordinary, with over 1,000 different types of plants alone – a third of all the species in Switzerland. Even the peony grows wild here. On top of that, the region is dotted with unique reminders of early traditional farming.

Nevertheless, urbanisation and modern farming methods are changing the cultural landscape. How can we protect the special character of the valley?
We spoke to Mark Bertogliati, forestry engineer and curator of the museum.

The cultural landscape, with its combination of forests, hamlets, terraced meadows and pastures, is truly eye-catching everywhere you look. The museum in Cabbio, for example, offers a stunning view of the upper valley and Monte Generoso. Scudellate and Roncapiano are great starting points for a hike. The region is in full, intense bloom.

What causes such rich vegetation?

“It’s typical of limestone areas – the poor soil quality means a huge range of plants can develop without one species dominating. During the last ice age, there were also ice-free areas on the Monte Generoso, meaning that the flora and fauna have been able to develop here over a longer period of time than in other regions. On top of that, the land has also been influenced by the mild climate and the actions of the people living here in the past.”

The most diverse areas are those open and semi-open buffer zones between forests and settlements, e.g. glades, meadows and fields. One example are the dry meadows that have been cultivated for thousands of years and are now of national significance, requiring a certain amount of cutting and care. It’s the same for chestnut woods and cultivated field terraces.

Traditional farming had a positive effect on nature. It created change where flora and fauna could adapt. Human intervention isn’t always bad, despite what you might think.

So human intervention in the landscape has been positive?

“We have nothing to compare with before the presence of human settlements, but we do know that people have been here a long time and found a balance with nature. Until the start of the 20th century, agriculture had a limited effect as farming wasn’t as intensive as today – it was more diverse. But things have changed, and that’s the problem. Why? From a purely commercial point of view, farming dry meadows and terraced hill slopes is no longer viable. But if they’re not taken care of, these important buffer areas can be lost. The forests grow along with the urban areas in the lower valley, and constructions start to collapse.”

Stay in an authentic, stylish building in the town centre or in a grand villa: the Muggio Valley is full of great B&B accomodation, some newly renovated.
The guest book of former Hotel Bellavista, kept in the Muggio Valley ethnographic Museum, shows signatures from 1867 onwards.
Did you know that the terraces of the Muggio Valley, slopes near the villages, are still visible today thanks to their exceptional state of preservation?

New stakeholders are needed to protect the valley, and they need to support the few surviving local farms. One of those is the Ethnographic Museum of the Muggio Valley, which opened in 1980. The museum works on maintaining dry-stone walls, mule tracks, chestnut woods, wells and buildings such as roccoli, graa and nevère and organise activity days with volunteers – a kind of flash mob. The museum’s most famous project, Bruzella Mill, just goes to show how successful a renovation can be. It’s not just enough to rebuild – there needs to be a purpose and people prepared to take on the hard work.

In this regard Mark states: “We’re currently doing comprehensive research into whether small settlements on the Alpe Nadigh and Alpe Génor – some real picture-postcard scenes – can be brought back to life.”

“The mix of nature, landscape and cultural history are what define the Muggio Valley.”

We grind 20 tonnes of corn each year.