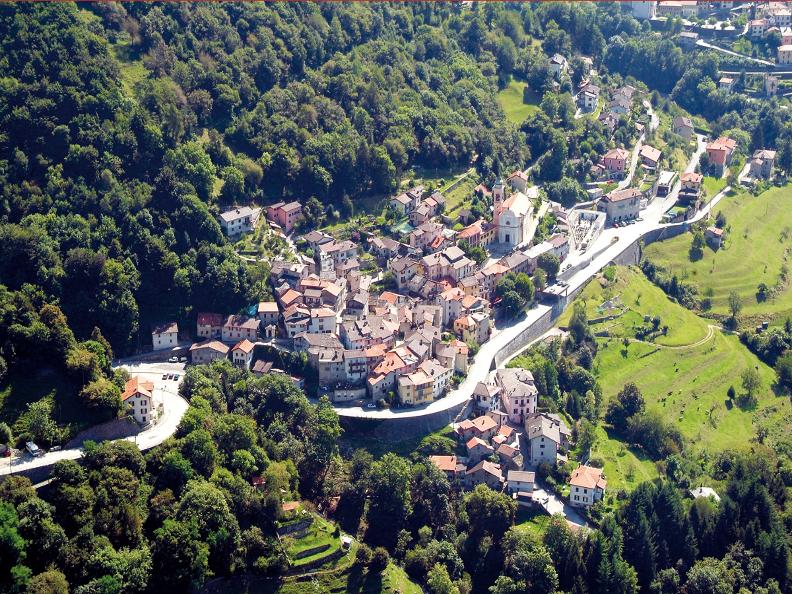 The Municipality of Muggio occupies a bowl-shaped area at the end of the Muggio Valley, and includes the hamlets of Scudellate, Roncapiano and Muggiasca, which all have their own schools. According to popular tradition the village’s name originated from the dialect “mücc” (“mucchio” or “pile”), a reference to the agglomeration of houses in the heart of the village. It has been inhabited since ancient times, and during the Middle Ages it included the lands of the “massaricii” (9th century). Towards the end of the 13th century the Authority of Como Cathedral owned a number of plots of land there.

From a religious point of view the community of Muggio has long-standing links with Cabbio, and subsequently formed a sub-parish (in 1673) annexed to the mother church of Balerna. It was only during the 19th century that Muggio freed itself from Balerna when the Church of St Lawrence was granted the status of parish church. The building officially dates back to 1578 but was later rebuilt, and has been restored several times. Muggio’s economy is based on agriculture (its coat of arms bears a corn cob and bunch of grapes), and shepherding, which consisted of “rudada”, a communal guardianship system, and “trasa”, pasture grazing. These two main activities were later followed by emigration. Initially this was linked to the artistic professions (one of Muggio’s most famous natives was the neoclassical architect Simone Cantoni), but it later became generic and often definitive.

In the last century, Muggio’s population was drastically reduced by two-thirds, from 652 inhabitants in 1900 to 206 in 2000. In the same period, there were less than a dozen inhabitants of Roncapiano, where the cantonal road peters out into a footpath and mule track. The peculiarities of Muggio – like the other old villages that formed the Municipality of Breggia in 2009 – have earned it an entry in ISOS, the Federal Inventory of Swiss Heritage Sites and since 2016 it is part of the association of the most beautiful Villages in Switzerland.