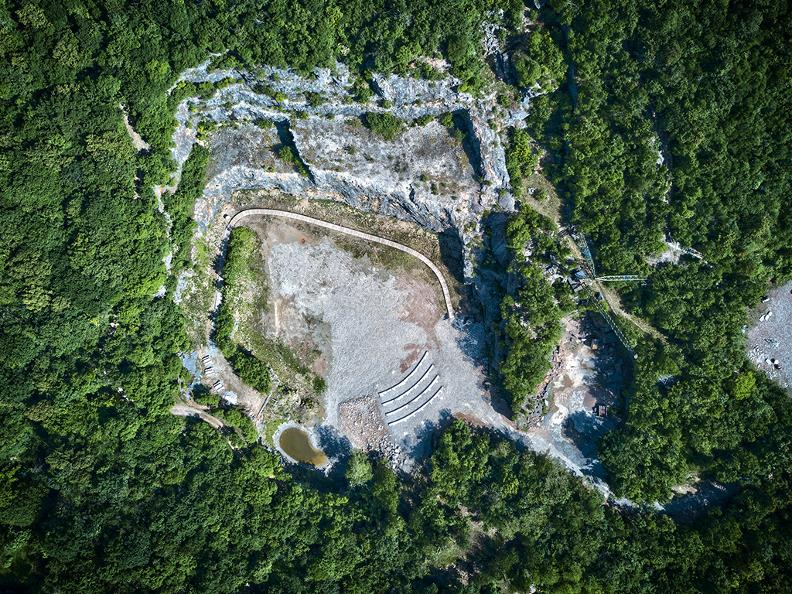 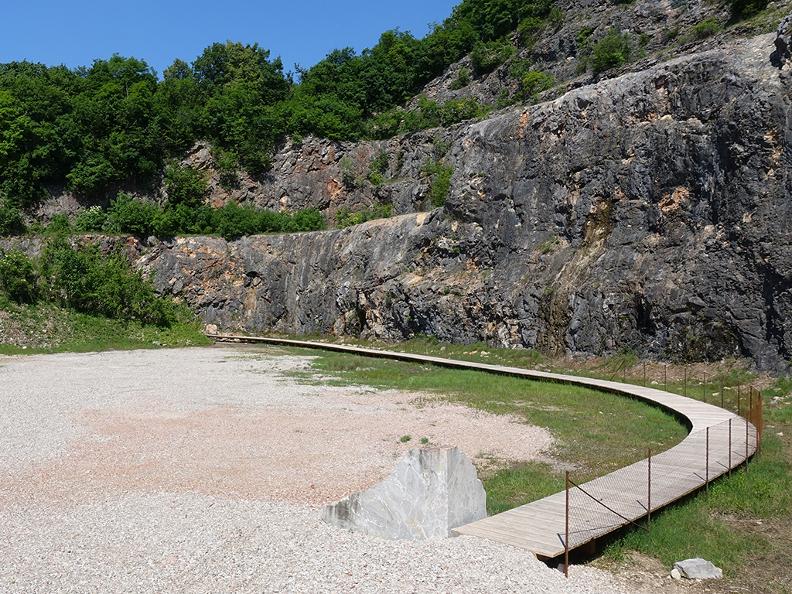 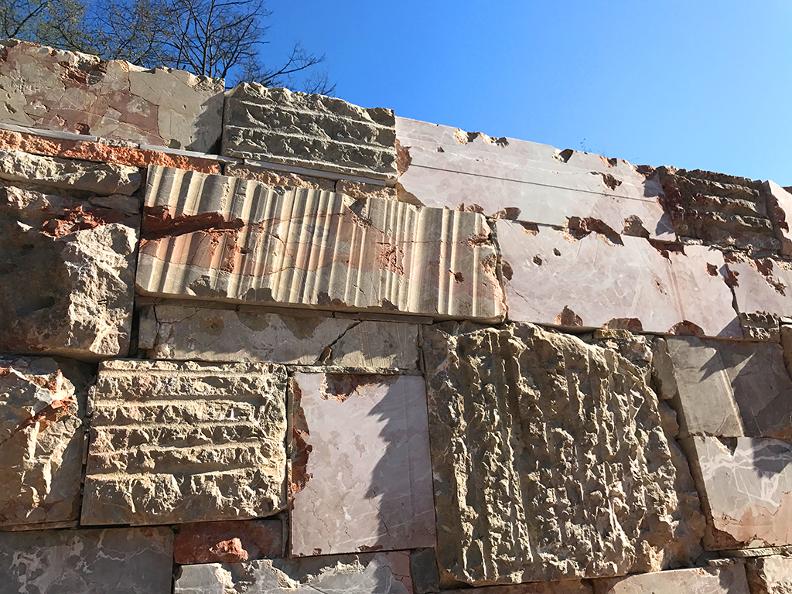 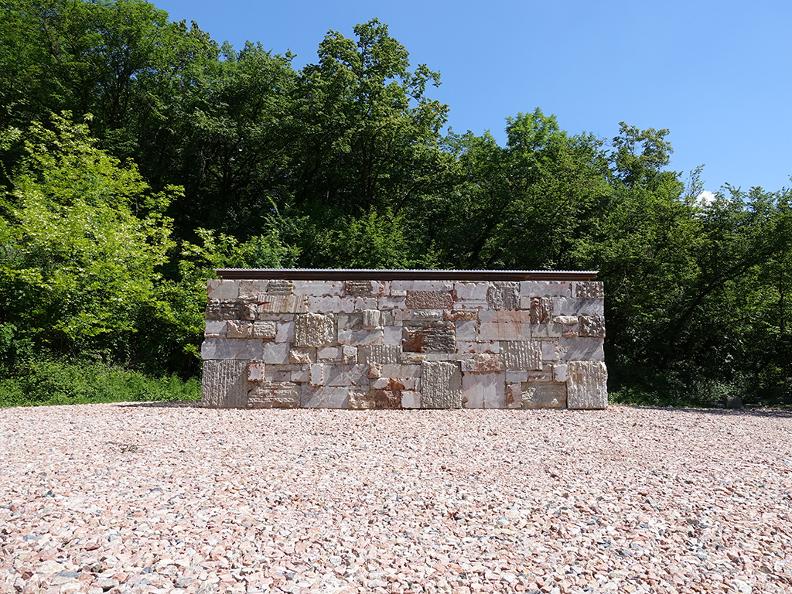 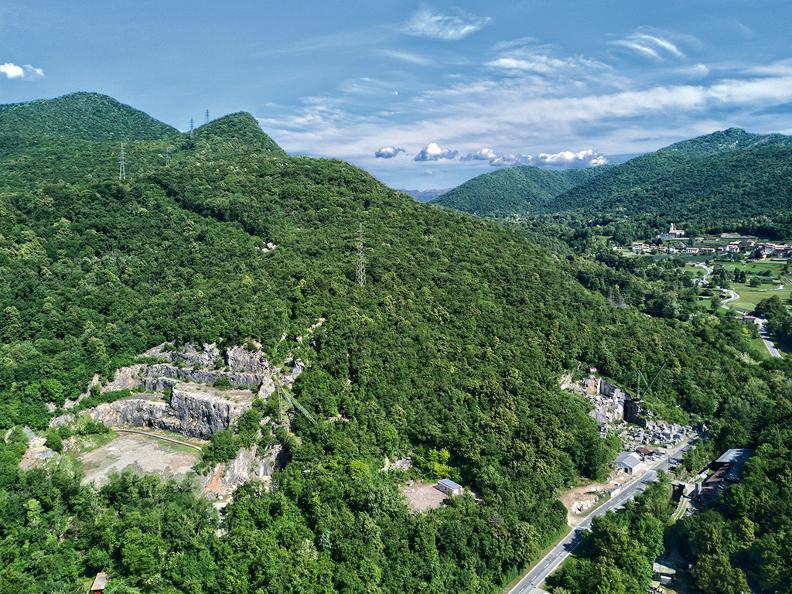 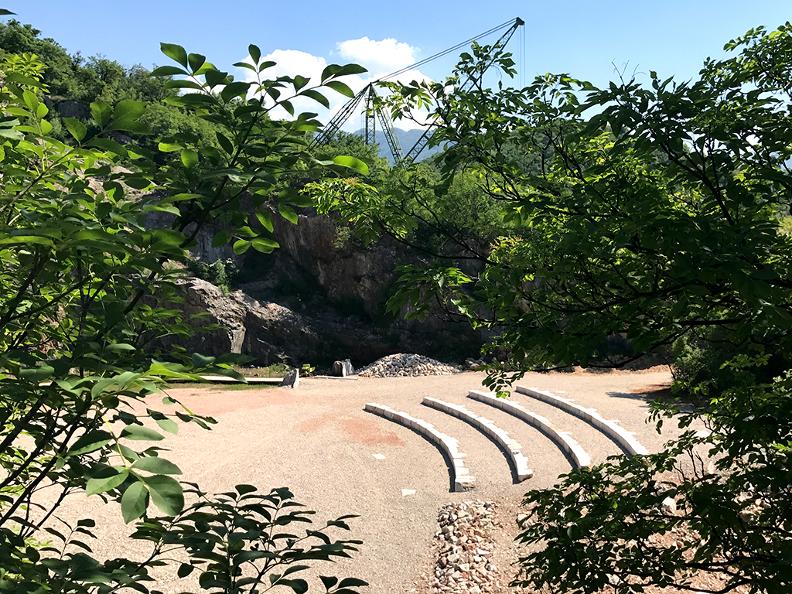 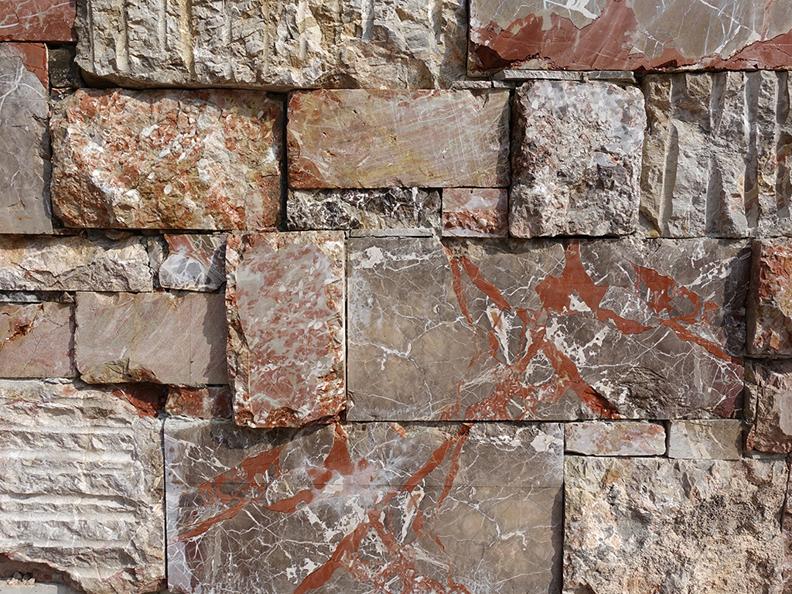 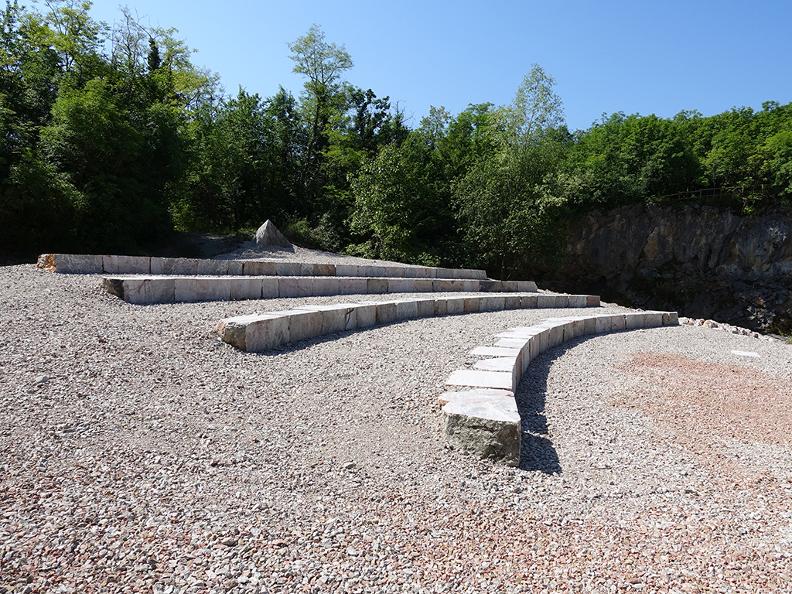 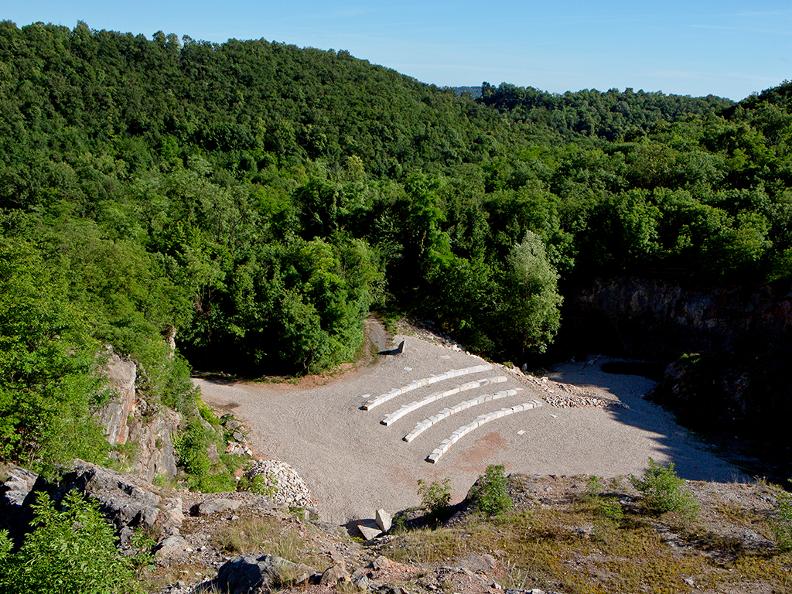 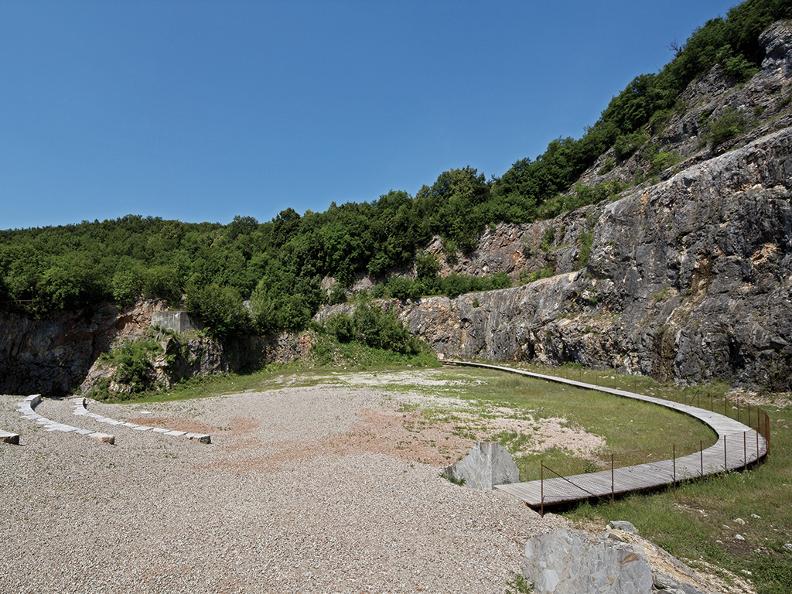 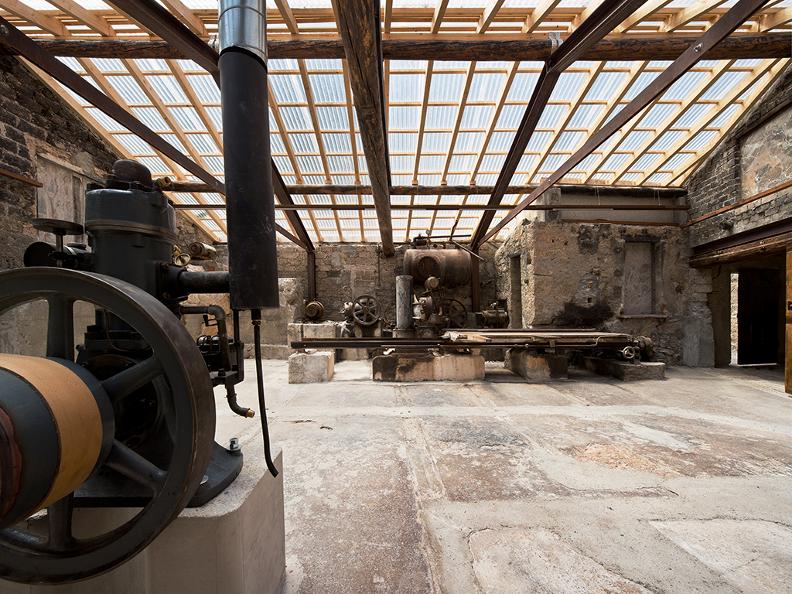 Workshop
A journey through stone processing.
The regeneration and restoration of the original production site have enabled the Patriziato di Arzo to develop the “Antico Laboratorio” (Ancient Workshop) exhibition space. Visitors today can admire old machinery used by the stone hewers and masons, learn about Arzo stone processing techniques and even discover the history of the people who worked here, in one of the seventy-two small quarries that employed 200 people until 1912. As well as the educational workshop, the visit also includes the natural-science amphitheatre created in the quarry and the educational trail.

The amphitheatre
A soul-stirring landscape.

The quarry complex is located on Monte San Giorgio (UNESCO WHL). The development of the natural-science amphitheatre project has offered the opportunity to restore and enhance the environmental mosaic represented by the large ancient red gravel quarry. This natural space also encompasses a geotope and a number of very interesting biological communities. An imposing and fascinating outdoor space, which aims to promote the site’s significant historical and natural features, created for the purpose of hosting public and private events.

The revival of the Arzo Quarries
Centuries of coloured marble extraction
Quarrying began here towards the end of the 14th century, when the great Gothic buildings were under construction. Rock quarried from the Poncione d’Arzo in the Monte San Giorgio region was purchased by large numbers of clients. To give just a few examples of what would otherwise be an endless list, Arzo marble elements can be seen in the cathedrals of Milan and Como, as well as in Germany and even in Warsaw, the places to which the largest numbers of the “Masters of the Mountain” tended to emigrate.

Various different professions worked in the quarries, from the hardworking quarrymen to the skilled stonemasons, female stone polishers and master architects. The work of stone hewers and marble cutters has never been easy. It has been affected by various crises over the years, forcing men to go and work elsewhere (central Switzerland, France), sometimes even taking them as far as the distant Americas.

Until the early 20th century all the work was carried out by hand using sledgehammers, chisels, levers and iron wedges.
After the 1920s, following the period of inactivity due to the First World War, there was a significant revival in Arzo marble quarrying thanks to two firms, Luigi Allio & figli and Rossi+Ci., which introduced new quarrying machinery.
Ottorino Rossi brought the helical wire machine from Carrara to extract the stone from the mountain: a complex mechanism of uprights with pulley wheels for the wire and a carriage fitted with a large wheel to keep the wire taut, with the wire running in the open for many metres (from 500 to 1000 metres) and cutting the stone with the power of water and sand.

The Allio quarry, situated further up, towards Poncione d’Arzo, had no electricity with which to power the helical wire, so in 1925 they installed a diesel engine produced by the German firm Hatz, which specialised in manufacturing engines for boats and ships.
Rossi+Ci., active for six generations until 2009, subsequently introduced other marble quarrying and processing machinery and built a larger workshop on the opposite side of the River Gaggiolo.
In the mid-1980s a decisive switch was made from the helical wire machine to the diamond wire machine, a method still in use today. This development made it possible to simplify and reduce quarrying times.

In geological terms, Arzo marble, so-called by those who quarry it, is a form of breccia. This polychrome sedimentary rock originated on the sea beds of a large ocean situated between the primitive African and European continents.

The importance of the Arzo Quarries has been internationally recognised for some time, as demonstrated by the numerous scientific publications on the tectonic phases, and paleogeography of the Alps, as well as on the rich and unique fossiliferous deposits dating back to the Triassic era.
Quarrying activity can therefore be attributed with uncovering this natural monument, making it available for scientific research and to the general population.