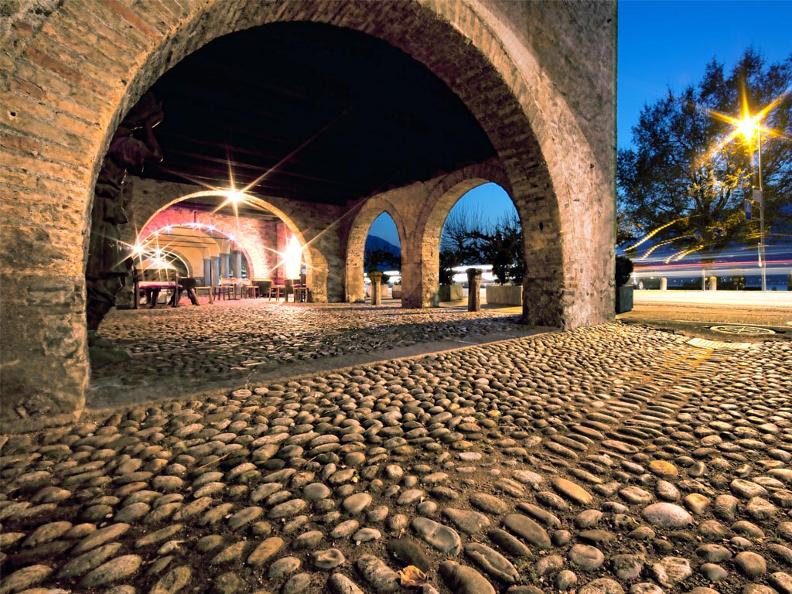 The name de Blixuni appears on maps from the Lombard period (735 and 854) in reference to the surname of certain important local figures.

The monastery of Saint Ambrose of Milan would claim the property in 864, and it is also documented in 962, 1034 and 1054 (in this year it is officially recognised for the first time as a castle). In the war between Como and Milan (1118-1127) for possession of the Ticino lands, Bissone was to become the centre of Ghibelline resistance.

The purpose of the first settlers was twofold: one was to construct a bypass, as Bissone constituted an important point on the route between the North and the South or to the Intelvese area; the other was mostly agricultural, involving working the land belonging to the monastery of Saint Ambrose on the terraced slopes.

The first buildings were therefore not constructed by the lake, which was originally swampland and thus impractical, but up in the hills. With the gradual development of the fishing industry, which then became the main business, such that Bissone, together with Morcote and Melide, held the monopoly in the fish trade for the Lugano market, the village then began to stretch out towards the lake in a comb-like pattern, with perpendicular streets for easy access to boats and a large open space where business and trade took place.

Between the 15th and 17th centuries, the colonnaded front area was constructed, which included the finest houses built by many artistic families of the nouveau-riche who had migrated to the area: Caratti, Gaggini, Orsatti, Bono, Pario, Garovo, Allio, Garovaglio, Castelli, Porro, Tencalla, Maderno, Verda, Somaini, Comanedi, Bussi, Casellini.

The equilibrium of the town’s traditional structure had already been distorted with the construction of the cantonal road and the Melide bridge-dam, which marked the transformation of the square into the main hub of traffic and caused a gap between the town and the lake, which gradually lost its importance.

Later, with the construction of the railway line in 1882 and the motorway in 1966, the historic centre became completely encircled and thus also became separated from the hills.