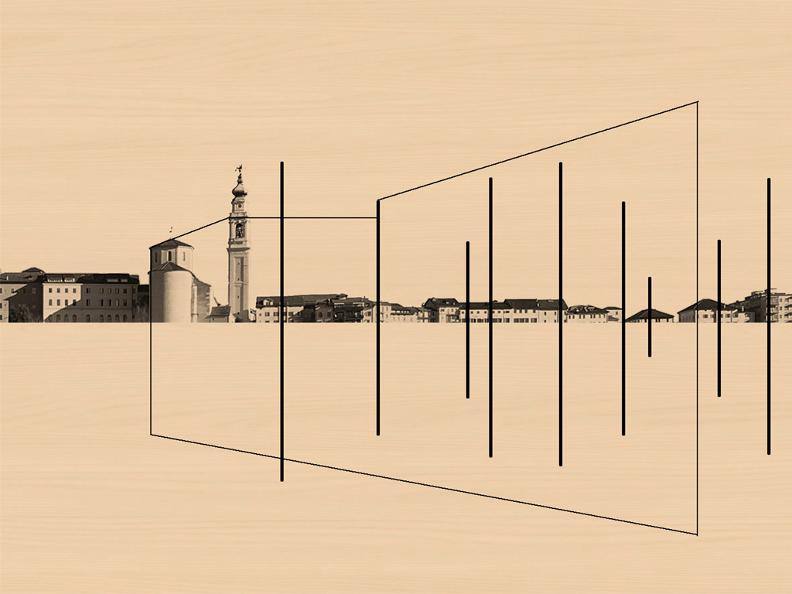 As I walk the places moveq

A patient deconstruction of the inhabited area to observe its components, separating the facades from the volumes, compressing the latter in a game of interlocking surfaces, so as to obtain a collage with an urban subject that has the levity of a constructivist composition. A bit like what happens in a graphics folder conceived as an exercise in education in seeing and recombining: the supremacist tale of the Two Squares of El Lisitskij, dedicated to All the Children of the World.

In Dell'Antonia's works, the passage between the photographic description of a real world, cut out with the accuracy of an anatomist, and the monochromatic intersections that reveal the possible abstract geometric composition of the built environment, actually has its own concrete beginning in the practice of an urban drift that observes before, as if it had never seen them, places usually lived. There is nothing spectacular about the late modernism that structures the built-up area of our cities; the repetition of architectural typologies between country and country makes it difficult to understand if it is an Italian, Swiss, German city, etc.. These ubiquitous forms of the building do not even make it possible to distinguish between the centre and the suburbs.

Dell'Antonia, propaedeutically, invites us to observe what surrounds us, in a sort of exercise for adults who rediscover a capacity to look capable of perceiving the sense of possible discovery, even where the relative anonymity of what surrounds us has long since dampened our capacity for attention. On the threshold between habit and discovery flows the line of crossing places that change as we observe them. Apparently nothing happens, we do not suffer from sudden dizziness, but something seems to lose ground if our gaze focuses on the shapes of things.

From this way of observing, which has something of the breath for a moment held back during a break in our walk, Dell'Antonia draws images in which a sequence of anonymous balconies can take on an unexpected compositional rhythm, where the lines of the building are not limited to defining the profiles of the buildings and their details, as in a functional architectural design, but extend into the air, generating morphologies that include the void as a visually perceptible element.